Update on this story is posted here

We have not travelled so far from 2012, nation witnessed such a  brutal act of “Gangrape”, the mentality  of those offenders we can see from their horrible and terrifying act.  Again we get to see such a dangerous mentality by the school going age boys through their social media (Instagram). On a usual day on 3rd May 2020, a new shocking reality comes out about Delhi teenage boy’s private group on Instagram named ‘Bois Locker Room’ which created a storm in all the social media platforms in whole country and concerned is raised in many institutions to assure their children’s against this cheap act and if any one is victim of the same.

On Monday DCW (Delhi Commission for Women) took suo moto cognizance for same.  An Instagram user Niska Nagpal is said to have leaked chats from the group, including vulgar and obscene image of many girls. She wrote, “A group of south delhi guys aged 17-18 types have this ig gc named “boy’s locker room” where they shit on, objectify and morph pictures of girls their age. 2 boys from my school are a part of it. MY FRIENDS AND I ARE FREAKING OUT THIS IS SO EWWW AND NOW MY MOM WANTS ME TO QUIT IG” The screenshots of chat were also shared and it gave a disturbing, horrifying and ugly side of society where we live in. The boys engaged in the group are mainly teenagers who are educated but the act by them is so shameful and give a concern to whole society where our upcoming generation is going.  In the group , they shared morphed images of girls and objectionable comments were made about minor girls also and lot more.  The group is mainly comprising of teenage school boys, primarily from class 11 and 12, and there are hundreds of boys from South Delhi. As the group alleged on Sunday, 3 May, that the group is used for sharing photos of underage girls, objectifying them, and promoting rape culture. On the very next day, Monday,  the DCW (Delhi Commission  for women) took suo moto cognizance on the incident. The DCW has issued notice to social medial platform Instagram and Delhi Police after leaked screenshots of lurid discussion from the group surfaced recently on all social media platforms and a massive outrage erupted online.

The topic of the group is always about passing lewd comments on girls and sharing their morphed images, also the hot topic of the group is “Gang-rape”, that of a minor girl aged between 14-16 which is evident from the screenshots, the boys in group circulated the pictures of girls  commenting on their body parts. The boys talk trash about women, body shame the,, morph their pictures…….list in endless if we have to look into their chats which were shared on social media platforms. They crossed their all limits as they passed lewd, derogatory and sexual comments on girls randomly on their pictures, having not being satisfied with what they were doing, the boys, photoshopped the faces of the girls on nude bodies and shared and talked about the same on snapchat also, as alleged.  In a screenshot that has gone viral it is evident that this underage boys were “planning a rape” and had made other such crude statements, even they objectified girls through their pictures and then they do all this cheap acts, from their chat a message reads as “We can rape her easily” and “I will come whenever you say. We will gang rape her”, were allegedly discussed on the Snapchat group.   A screengrab was also shared where a boy could be seen convincing others to gangrape a girl. Though it should be noted that these are two different cases as the mediums are different – Instagram and Snapchat

DCW sent a notice to Instagram and the police,  notice reads as “This commission has received a number of screenshots related to this group which are extremely objectionable and explicitly mention rape threats to even minor girls. Members of this group also have personal information about these minor girls, The suo motu cognizance of chats among Delhi schoolboys in this group, which revealed that they were sharing private photos of underage girls, sexualising them, planning to rape them and  gang rape minor girls. On the same evening, the Cyber Crime Cell of Delhi Police took cognizance of the crime and file a case against the accused under relevant IT Acta and different sections of IPC.

The accused under the said case should be punished under Section 345A of IPC which holds them accountable for one-year imprisonment- for posting lewd comments on social media. Section 507 of IPC holds them punishable for 2 years threatening a woman by any kind of anonymous communication which is also intimidating. Section 509 of IPC– 3 years of imprisonment with a fine for posting sexual pictures or remarks or videos including sexual insinuations on social media. Section 503 of IPC– 2 years of imprisonment for threatening a woman by either alarming or malign her reputation. Section 499 of IPC– 2 years of imprisonment for defaming a woman online. Also teh act of morphing photo and sharing images of people’s parts would be violation Section 66E of the IT Act, as well as Section 354C of IPC.  DCW chairperson Swati Maliwal said  “This act is evidence of a disgusting, criminal, rapist mentality” she further added “Boys in this group must be arrested, a strong message needs to be sent”  The Delhi Cyber Crime Police have been asked to furnish a response by May 8.

“We have taken cognisance of this matter. A detailed report is being prepared regarding this, which will be sent to Instagram soon.”  said by NCPCR (National Commission for Protection of Child Rights) chairperson Priyank Kanoongo.  This instance and the accused attached with the same must be punished with the stringent way as to create a example in society and to safeguards girls on social media platform.   The accused have no terror of system, police, legislation or whatsoever as, after happening all this , as per the  screenshot became viral, members of the group reportedly changed their user name. Meanwhile, a new Instagram page ‘Bois Locker Room 2.0’ has been created 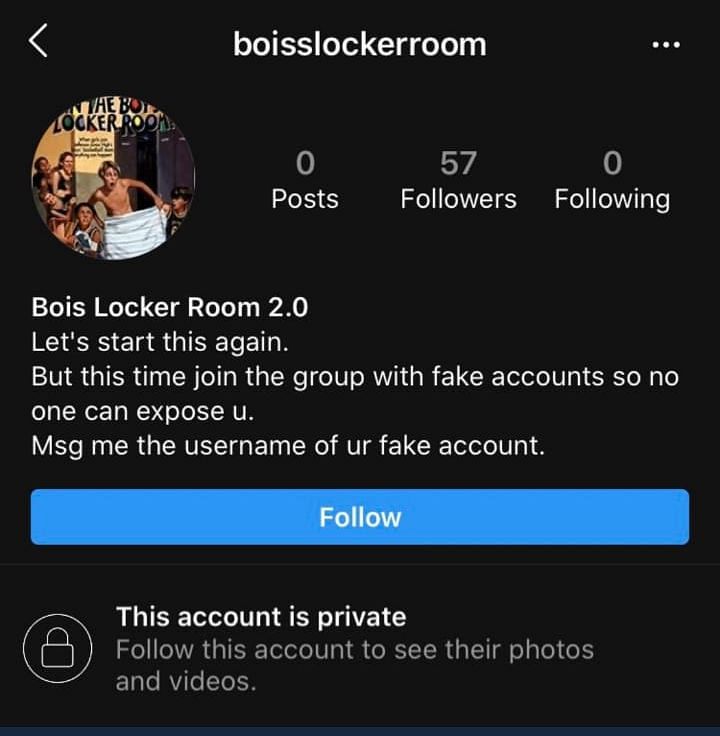 As a men writing this post, its so disheartening that today even itself we don’t know exactly where generation is going, we have not travelled so far from that horrific incident of 2012 and again more deadlier and horrific mentality of rapist is cultivating in such a young minds, but the need here is to end this and think what are the reasons for it? This instance also poses a chain of questions as to what led these boys belonging to the age bracket of 15-18 to resort to this. Is it the deep-rooted male toxicity and privilege? Is it unnecessary access to internet facility? But for sure, it is a crystal clear case of female objectification online if nothing else, which once again revives the argument that mere lip service, never-ending pages about privacy policies on the part of the social media companies aren’t enough to safeguard the women’s rights online. It requires resources, transparency, and coordinated action from social media companies and governments. Also, we have legislations, guidelines, judgements  but now there is need to focus on more stringent laws for social media platforms to ensure privacy of individual’s especially minor girls. At last,  if you know anyone of who us victim of such activities or you witnessed any activity of this sort just raise your voice, its the right time. Lets try to make a change and a better society to live in, in present I am confused and concerned about where are we living as even in lockdown girls feeling unsafe just because a bunch of guys who promoted the rape culture in all possible way.

” The dead cannot cry out for Justice. It is a duty of the living to do so for them.” – Lois Mcmaster Bujold