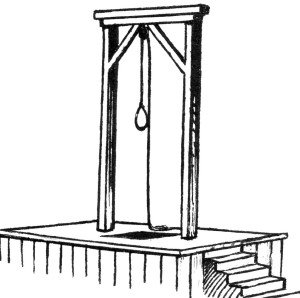 I will believe in the death penalty when you will prove to me the infallibility of human beings.

INTRODUCTION: Death penalty has been the subject of an age-old debate between Aboiltionists and Retentionists, although recently the controversy has come in sharp focus. Both the groups are deeply anchored in their antagonistic views. Both firmly and sincerely believe in the righteousness of their respective stands, with overtones of sentiment and emotion. Both the camps can claim among them eminent thinkers, penologists, sociologists, Jurists, Judges, legislators, administrators and law enforcement officials. But basically death penalty is irreversible. Decided upon according to fallible processes of law by fallible human beings, it can be -and actually has been- inflicted upon people innocent of any crime. There is no convincing evidence to show that death penalty serves any penological purpose as in case of retribution deterrence or reformation.  Execution by whatever means and for whatever offence is a cruel, inhuman and degrading punishment.

Lawmakers are eager to appear resolute in the fight against crime, but seem to forget that certainty of punishment, not severity, is the real deterrent. “An eye for an eye makes the whole world blind,” said Mahatma Gandhi. The death penalty is unjust and inhuman. Its continued use is a stain on a society built on humanitarian values, and it should be abolished immediately. Even the architect of the Constitution, Babasaheb Ambedkar, admitted in the Constituent Assembly that people may not follow non-violence in practice but “they certainly adhere to the principle of non-violence as a moral mandate which they ought to observe as far as they possibly can.” With this in mind, he said, “the proper thing for this country to do is to abolish the death sentence altogether.”

ARGUMENTS IN FAVOUR OF THE DEATH PENALTY: ARGUMENTS AGAINST THE DEATH PENALTY:

Also Read:  Know Your Rights: Protect Yourself at Work Place

INDIAN SCENARIO: In India, capital punishment is granted for different crimes, counting murder, initiating a child’s suicide, instigating war against the government, acts of terrorism, or a second evidence for drug trafficking. Death penalty is officially permitted though it is to be used in the ‘rarest of rare’ cases as per the judgement of Supreme Court of India. Paradoxically, whilst the “rarest of the rare” doctrine has been used to limit and restrict the use of the mandatory death penalty elsewhere in the world, it has often had the opposite effect in India. Asian Centre for Human Rights (ACHR) in its report “The State of Death Penalty in India 2013” stated that as per the records of the National Crimes Records Bureau (NCRB), Ministry of Home Affairs, Government of India, a total of 1,455 convicts or an average of 132.27 convicts per year were given death penalty during 2001 to 2011. “This implies that on average one convict is awarded death penalty in less than every third day in India. The rarest of rare case doctrine for application of death penalty has become routine. Death penalty is no longer the exception but the rule,” said Suhas Chakma, coordinator, National Campaign for Abolition of Death Penalty in India and Director of ACHR.

CONCLUSION: Human life is perhaps the most precious gift of the nature, which many describe as the Almighty. This is the reason why many believe that capital punishment should not be imposed irrespective of the nature and magnitude of the crime. Others think that death penalty operates as a strong deterrent against heinous crimes and there is nothing wrong in legislative prescription of the same as one of the punishments. But if death penalty has some deterrence effect then why the execution of Nathuram Vinayak Godse for assassination of none other than the father of the nation, Mahatma Gandhi, has not acted as a deterrent against assassination of many prominent political leaders including former prime ministers Indira Gandhi and Rajiv Gandhi, former Punjab chief minister Beant Singh, MP Lalit Maken and many other prominent political leaders. There is no scientific or empirical basis to suggest that death penalty acts as a deterrent against any crime. Even Krishna Iyer J. conceded in Rajendra Prashad’s case that death penalty may be awarded where the killer is such a monster or a beast that he can never be reformed. The reason generally advanced for retaining the death penalty is protection of society. It means that the criminal is exterminated and got rid of once for all. But it must be remembered that it is not by the fear of death but by generating in the community a sentiment of horror against killing that we can hope to deter offenders from committing that act. In the end, researcher would like to cite a quote by J.R.R. Tolkien, “Many that live deserve death. And some that die deserve life. Can you give it to them? Then do not be too eager to deal out death in judgment.”