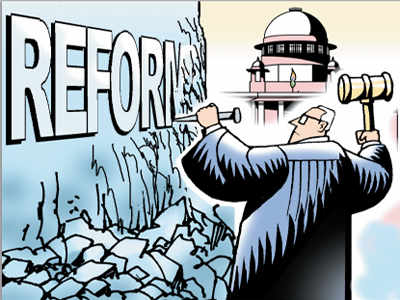 This post has been written by Aditi Singh, a first year law student from Hidayatullah National Law University, Raipur

Before discussing about All India Judicial Services examination, we should know about the Judiciary in our country. India has a single integrated system of Judiciary in the view of a single Constitution. The framework of the current legal system has been laid down by the Indian Constitution and judicial system derives its power from it. The Constitution of India is the supreme law of the country, the fountain source of law in India. The judiciary in India acts as the custodian of the Indian Constitution and the protector of the Fundamental Rights of an individual. The Indian Judicial System is one of the oldest legal systems of the World. The local customs and religion majorly influenced the Indian legal system. The judicial system in India is integrated and pyramidal in structure with the Supreme Court at the top and the High Court and the other Subordinate Courts.

There are various levels of judiciary in India – different types of courts, each with varying powers depending on the tier and jurisdiction bestowed upon them. They form a strict hierarchy of importance, in line with the order of the courts in which they sit, with the Supreme Court of India at the top, followed by High Courts of respective states with district judges sitting in District Courts and Magistrates of Second Class and Civil Judge (Junior Division) at the bottom. Courts hear criminal and civil cases, including disputes between individuals and the government. The Indian judiciary is independent of the executive and legislative branches of government according to the Constitution.

Currently, the recruitment of lower level judicial officers is conducted by the respective state governments in consonance with the State High Courts. There are majorly two ways to become a judicial officer in our country – the first is LOWER JUDICIARY SERVICES EXAMINATION, any student who has completed his/her law degree can give this exam. The exam is conducted in 3 steps first the students have to give prelims and then the selected students will proceed to give mains and finally the students will be selected for the interview. Students who clear the Lower Judiciary Services exam are posted as civil judge junior division, who has the power of a Judicial Magistrate second class. The second way is to give HIGHER JUDICIARY SERVICE EXAMINATION, anyone who has some experience in litigation generally for 7 years is eligible for this. A person who qualifies it can directly become an ADJ, that is, Additional District Judge.

It takes 15-20 years of service to become a District Judge and then some of the district judges gets the chance to go to HIGH COURT, and they are selected by Collegium system.

WHAT IS ALL INDIA JUDICIAL SERVICES (AIJS)

Now we are going to discuss about the meaning, history, need, benefits and some of the arguments against the All India Judicial Services Examination(AIJS) :

NEED FOR All India Judicial Services:-

Also Read:  CLAT 2020 postponed to June 21 due to ongoing lockdown; Application deadline extended to May 18

ARGUMENTS AGAINST ALL INDIA JUDICIAL SERVICES EXAMINATION WITH PROBABLE SOLUTIONS

The topic of AIJS has been discussed since 1950s, but still we does not have any national level examination for judiciary and the main reason behind it is the objections and arguments against it. The judiciary in our country especially the High Courts have been continuously repulsive to the proposal for the institution of All India Judicial Services examination. The main arguments against AIJS are as follows :-

Also, a country like America follows the method of  “check and balance”, in which all the three branches, that is, judiciary, legislature and executive are independent but they keep a check upon each other, so the system work in a more transparent and progressive manner. So, if India starts following the “check and balance” method, it would improve the  quality and efficiency of work.

I have discussed about the current procedure of recruiting judicial officers and I really think that All India Judicial Services should substitute it because if we want to create a robust judicial system at the subordinate level and a rich pool to draw from for the appointment of high court and, later, Supreme Court judges, the constitution of an Indian judicial service is a sound idea and only a meritocratic service with a competitive recruitment, high-quality uniform training and assured standards of probity and efficiency would be able to ensure speedy and impartial justice in India. As a matter of fact AIJS will be able to grab a lot of attention from the youth because it will ensure their representation from the very beginning as they will be selected on the basis of their merit and capability and not on their experience.